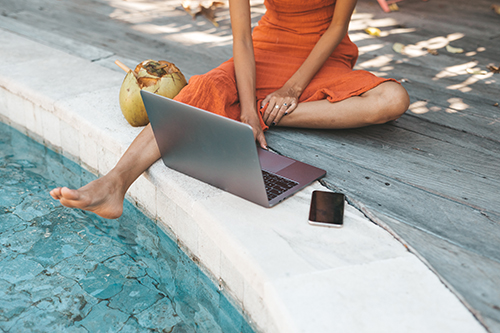 How To: Avoid The Flick And Crash

The flick and crash is a roasting term coined by Scott Rao in his book titled The Coffee Roaster’s Companion. The term is part of his second commandment of roasting and it defines an event that can occur around the time of first-crack and again around second-crack. It can have many causes, which we’ll explore later in the post. The crash is an event that normally happens immediately after the flick.

Caveat emptor; even Rao states that these are guidelines.

Please don't take the word "commandment" too seriously. One may transgress some of these rules harmlessly on occasion. As with a certain other list of commandments, however, if you make the habit of ignoring the rules, you might end up in a bad place

There are many different ways to roast coffee and many ways to achieve the desired roast profile. Understanding what the flick and crash events are, what causes them, what effects they have on the roast, and ways to avoid them will improve your roasting skills, even if you don’t always avoid flick and crash. There are many things going on in the roasting environment that we still don’t understand. Roasting is a very complex event. As roasters, we should always be prepared to have our theories disproved and always be receptive to new theories—with an appropriate level of skepticism of course. Do your own experiments. Roast, cup, and analyze each batch. If you find you like the flavors caused by the flick and crash, then by all means, let your roast flick and crash. The truth is always in the cupping results and what you—and your customers if you are selling—prefer.

In order to visualize the flick and crash in your roasts, you need to document the RoR of your bean temperature. The RoR, at least with Artisan software, is too noisy to use during the roast (Artisan v. 1.3.1 fixes this), so it’s something I enable after the roast is done. More on the RoR later.

You can view the settings I use in Artisan to track RoR here. 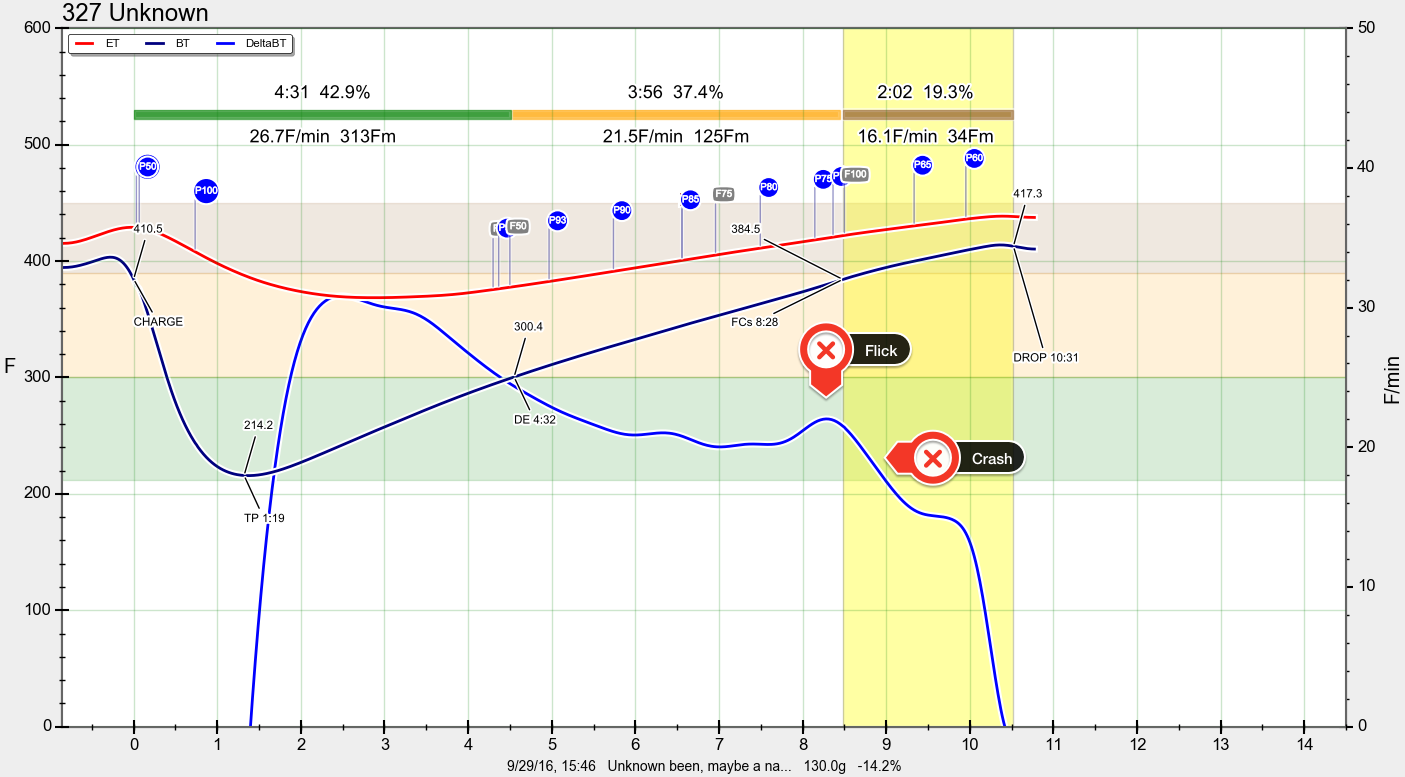 The image above is from Artigan Roaster Scope, an open-source, free roasting software. I use Artisan to interface between my laptop and my HotTop roaster. Using the software as well as an Arduino-based microcontroller I’ve installed in the roaster, I am able to control the roaster from my laptop and as I make control changes, Artisan annotates the graph to indicate the exact time and temperature of the control change.

Think of it like driving a car; as you approach a red light, you start to let off the gas, but you’re still giving it gas. You’re still providing energy for forward momentum, just a steadily-decreasing amount.

In the image above, the flick starts around the 8-minute-mark of the light blue line. It can be seen as the sudden increase in the rate-of-rise. It indicates that the roast momentum is no longer dropping as it always should in order to conform to Rao’s guidelines.

The flick is initiated when chemical reactions within the beans switch to an exothermic state and begin producing heat, rather than absorbing heat. The beginning of this, Rao calls an exothermic flash. If the operator doesn’t anticipate the new source of heat in the roast, the RoR will increase or “flick” momentarily.

In the image above, I believe there is too much momentum and FC is introducing more heat into the environment and the combination of the two caused the flick. I did not do a good job of anticipating the sudden increase in heat caused by the exothermic reactions of FC. When the beans went exothermic, the added heat pushed the momentum in a positive direction.

Again in the image above, looking at the light blue, decreasing line, the crash is the steep drop immediately after the flick. Like the flick, it can be caused by a number of things; the beans no longer producing enough heat to significantly affect the momentum and/or control changes made in response to FC.

In the example above, the crash was likely caused by a combination of things; the end of significant exothermic activity in the beans as well as control changes I made to the roaster; an increase in fan speed and a decrease in power.*

Avoiding The Flick and Crash

And now we get to the good part; how to avoid the flick and crash. 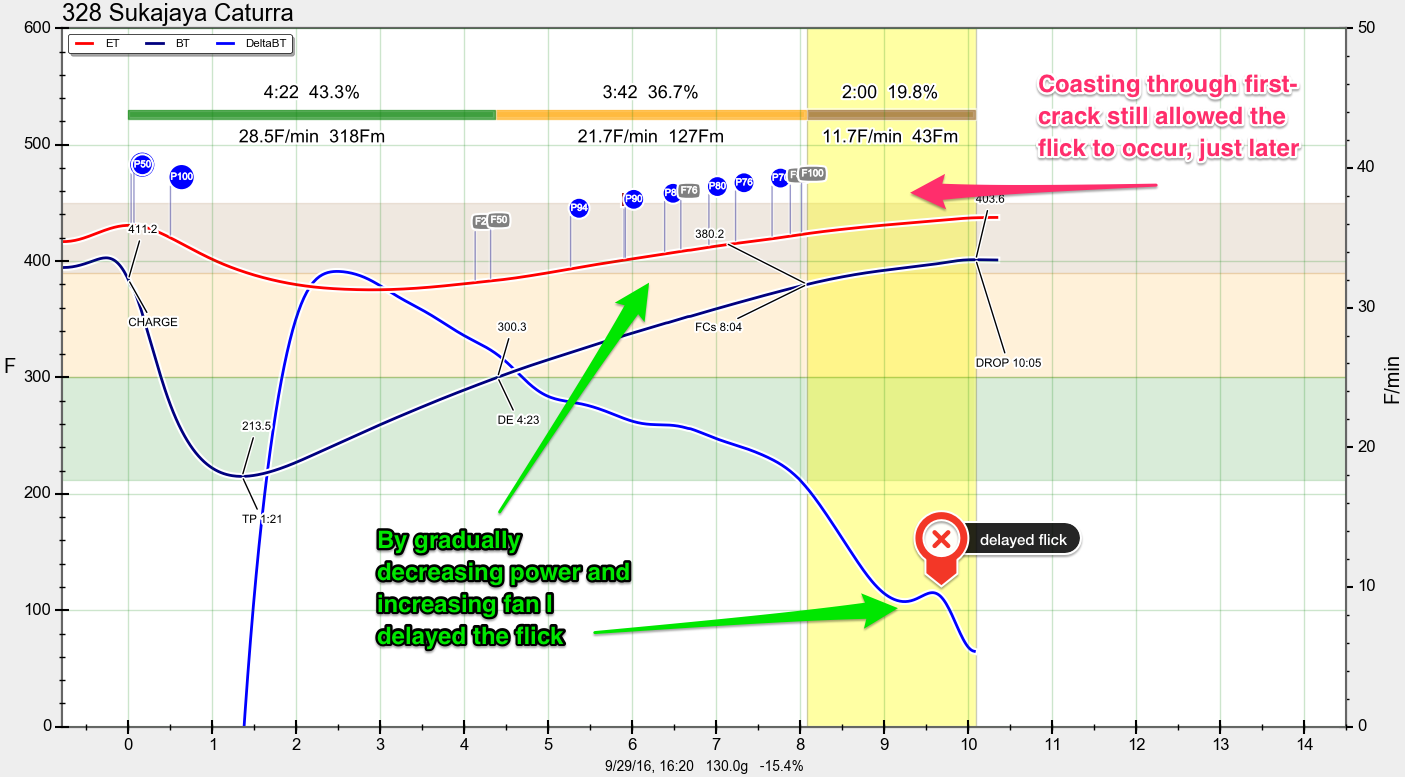 The image above represents a new roast, performed right after the previous roast as I try to avoid the flick and crash. In both roasts, when the ET hit 390°F I started steadily decreasing the power, indicated in the image by the blue circular annotations with Px to indicate the new power level setting. In the previous roast (roast #327), the changes were less frequent and further apart. In the second roast (#328) I made more frequent changes to the power. For roast #328, I got the power down to 65 just before FC and in #327 power was at 75 just before FC, a 14% difference in applied heat. I also made an additional adjustment to fan speed in #328. For roast #327, fan speed was at 75 until the onset of FC. In #328, I set the fan speed to 85 at 7:51, in anticipation of FC. 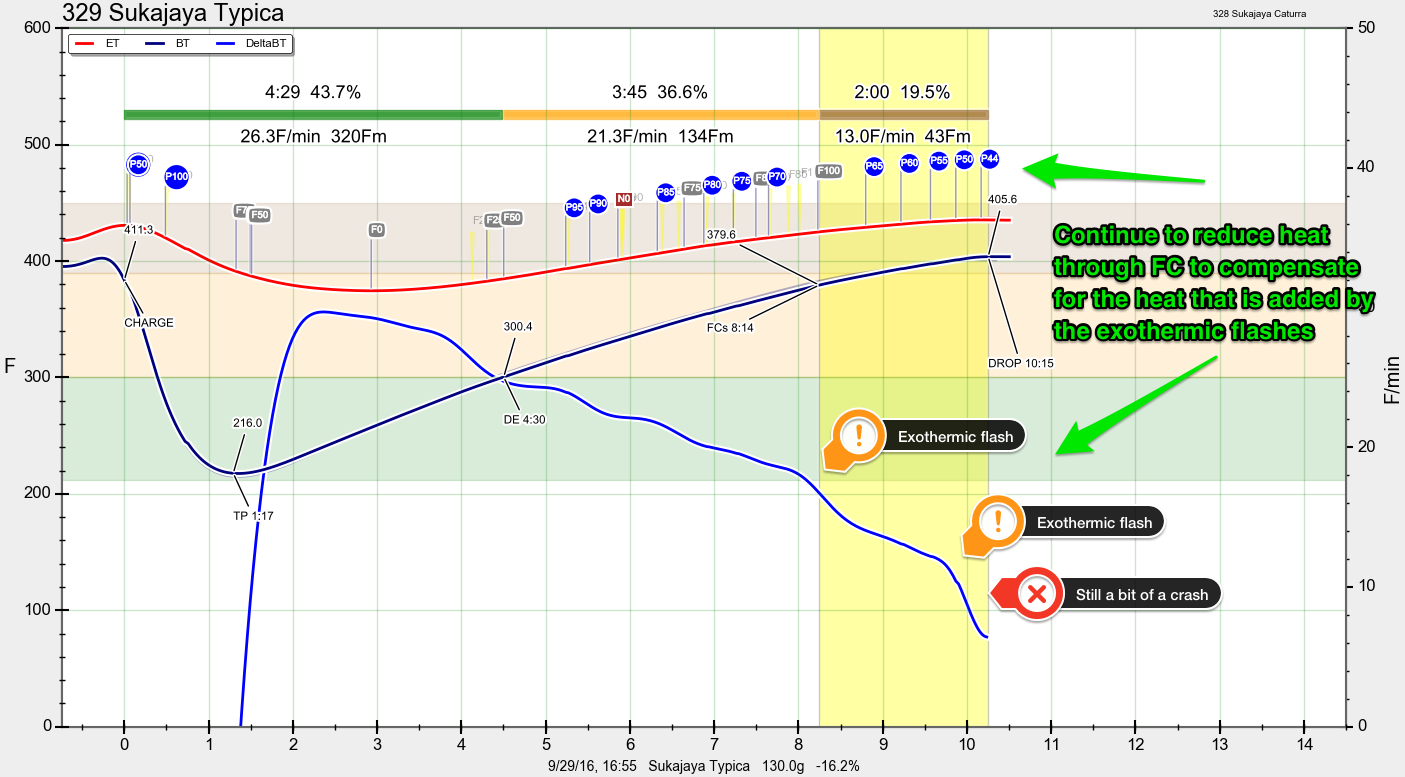 My recommendations for finding out how to avoid the flick and crash on your roaster:

In the example above, I violated two of those recommendations: roast number 327 was an unknown bean (some spare beans I had knocking around) and in roast #328 there were additional fan adjustments right at and again just after the turning point (TP). These fan adjustments were Artisan alerts I configured improperly—automated roasting gone awry.

The techniques above will help you discover how to avoid the flick and crash on your machine, in your environment. The basic principle is that the flick is a sudden increase in RoR caused by excessive heat and the crash is the opposite; the sudden decrease in RoR caused by a reduction in applied heat. Both events can be countered by making gradual control changes prior to the onset of FC and then immediately after FC. You want to set the stage for the rapid changes that happen after the onset of FC so that your RoR remains stable and is consistently declining and once FC happens you want to account for the effects of exothermic reactions that come and go rapidly.